Thought Machine to close series B round at $125m, raising $42m in additional funding 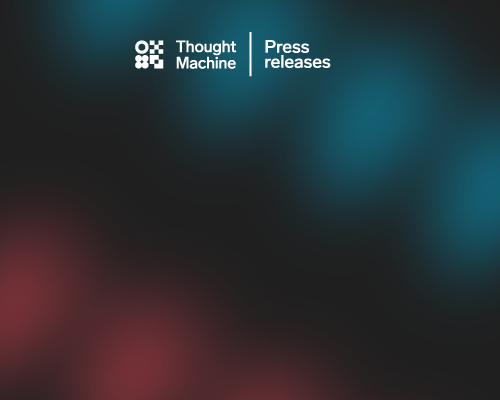 Thought Machine, the cloud native core banking technology firm, today announces the signing of an additional $42m in funding for its series B round, due to close in early August. Eurazeo Growth is leading this extension, with British Patient Capital and SEB also coming in as new investors. Royal Park Partners acted as financial adviser.

Founded in 2014 by former Google engineer Paul Taylor, Thought Machine has built Vault Core, a modern cloud native core system for banks constrained by legacy technology. Over the last months, the company has scaled up international hiring, adding 100 employees in the first two quarters of 2020 across three regions. Thought Machine has also expanded product compatibility to all major cloud providers and will be making major client announcements in the coming months.

With this new round of financing, Thought Machine will continue to invest in growing its business internationally – also hiring key roles in APAC, US and Australia, while continuing to develop new products and features, including its upcoming advanced payments solution.

In addition to Eurazeo Growth and BPC, SEB, a customer of Thought Machine, will join this round. The incoming investment follows a period of testing and implementation of Thought Machine’s core banking platform into SEBx – SEB’s strategic initiative focused on exploring new technologies and future customer offerings. From customer to investor, SEB’s participation in this funding round solidifies their commitment to exploring and leveraging the benefits of modern core banking.

Eurazeo Growth is the growth equity arm of Eurazeo, a leading investment company in Europe, with €18.8bn of assets under management. Eurazeo Growth actively contributes to the emergence of leaders in the technology sector by backing promising entrepreneurs with the purpose to drive the European innovation ecosystem forward. Eurazeo Growth will invest into Thought Machine to support the roll out of the company’s superior core banking solution globally and to assist in delivering strong organic growth over the long term.

The prospect of transitioning to cloud native technology is now at the forefront of every major bank’s roadmap. Plans have been hastened in the wake of regulatory pressure, economic uncertainty and the need to manage cost-income ratios. Our flagship core banking product, Vault Core, brings the best in agility, resilience and security and is being used by major banks and fintech companies around the world. We are delighted to partner with Eurazeo Growth, British Patient Capital and SEB, which demonstrates ongoing investor interest in our technology and the significant market opportunity we are addressing.

Eurazeo Growth partners with category leaders that have significant market potential in a fast-changing world driven by digitalization. Our investment in Thought Machine demonstrates our belief in the technology Paul and the team have been building and the importance of cloud native technology for the finance industry. Banks around the world are undergoing a fundamental digital transformation while moving to the cloud in response to increasing regulatory complexity, more sophisticated customer needs and growing competition from new entrants. Fintechs are maturing to position themselves meaningfully in the value chain. Thought Machine’s commercial traction is a testament to that paradigm shift. This is why we are so excited about partnering with Thought Machine.

We have been working with Thought Machine as part of SEBx’s technology exploration for some time now, building financial products and services in completely new ways. Thought Machine brings a fresh perspective to a traditional industry and our investment is a natural next step as we deepen and broaden the relationship. We are excited to join Thought Machine on this journey, thus far as a partner and now also as an investor, bringing together the strengths of the SEB Group with promising new technologies.

This direct investment by British Patient Capital, alongside our fund managers IQ Capital and Draper Esprit, will be a significant step forward to achieving our long-term vision for more home-grown and fully-funded high growth companies to fulfil their potential to be players on the global stage. We have followed Thought Machine’s development closely, and have been particularly impressed with the scale of the team’s ambition. By focusing on transforming core banking technology Thought Machine can bring innovation, agility and resilience to banks around the world. We are delighted to be a long-term investor in the business.