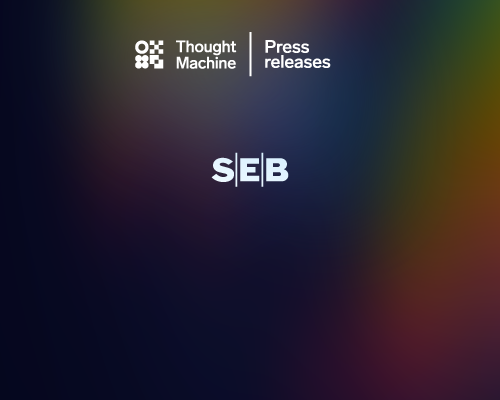 Nicholas Moch, Group CIO of SEB: “The SEBx team has a clear mandate to explore leading technologies in its quest for creating next generation customer offerings, and also to explore viable technology options for the future of the Group. Having the opportunity to build a bank from the ground up within SEBx, we are determined to work with partners that bring new perspectives to a traditional industry, and the team at Thought Machine does that.”

The decision to use Vault Core is resounding endorsement of Thought Machine. SEBx examined the wider core banking market to find the most stable, scalable, secure, and versatile core banking engine. In particular, SEBx prioritised a cloud native platform, designed for the era of AI, machine learning, and Open Banking.

Christoffer Malmer, CEO of SEBx, said, “While matching our ambition to develop excellent customer experiences in a speedy manner, we believe that Vault Core also offers the benefits of flexibility, scalability and security through its cloud native design. The first product to be built on Vault Core and the SEBx platform will aim to service the solopreneur – or the self-employed – in completely new ways.”

Naturally, Thought Machine is delighted to partner with SEB on this remarkable project.

Paul Taylor, CEO and founder of Thought Machine, said, “This is very exciting news for us at Thought Machine and we see it as an important endorsement of our revolutionary cloud-native core banking engine, called Vault Core. SEB is one of the most innovative banks in Europe, and it is significant that they have decided to deploy Vault Core as part of their technology exploration. We are delighted to work with the team at SEBx on their goal to champion the solopreneur.”