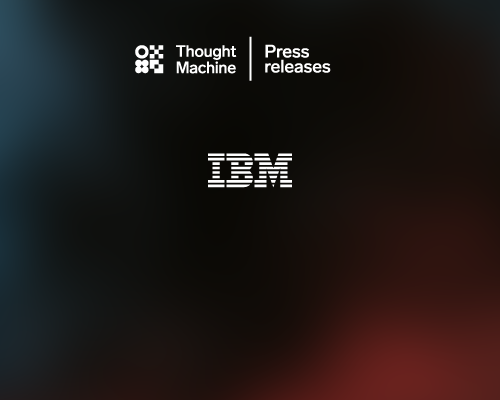 Many established banks have the ambition to deliver better digital services to their customers but are held back by their complex core banking platforms. On average, banks spend a significant proportion of their IT budgets maintaining their current operations leaving them little ability to invest in developments to offer services that customers expect.

The significant increase in digital services demanded by banks’ customers is increasing the pressure on core systems. Alongside this, new banking players are using the latest technologies to disrupt the market. Thought Machine created Vault Core to give traditional banks with legacy systems and business constraints a solution to be able to fight back against new players while adapting to meet the new demands of customers and regulators.

Thought Machine’s Vault Core is a cloud native core banking system which allows banks to fully realise the benefits of all clouds including the IBM Cloud. The system has been developed to be highly flexible giving banks the ability to quickly add new products, accommodate shifts in a bank’s strategy or react to external changes in the market.

With complete flexibility in the products, operating model and user interfaces, Vault Core can connect to both customer applications and the internal applications that bank staff use to run the bank.

Already the joint team is in advanced discussions with a number of major banking institutions around the world. In the UK, Lloyds Banking Group has been working with both parties to explore Vault Core's functionality and ability to deliver value for its customers and the Group as well as the options available for further development and roll-out of the platform.

Zak Mian, Group Director, Transformation, Lloyds Banking Group, said: “A key part of our recently launched three-year strategic plan is applying technology innovation to meet our customers’ evolving needs. I’m really excited to work with IBM and the Thought Machine team to explore ways to simplify and enhance our IT architecture and helping on our journey to make banking easy and simple for customers.”

“Banks have built interface layers with more modern technology, but there is only so far you can go before the foundations themselves have to be replaced. Building the new foundations for banking is Thought Machine’s mission and Vault Core is Thought Machine’s next generation core banking platform. This specially designed cloud native new platform has been written to bring a modern alternative to current platforms that many banks around the world are struggling to maintain” said Paul Taylor Chief Executive Officer Thought Machine.

“Most banks are constrained by their legacy core banking systems. Vault Core offers the first core banking platform built in the cloud from the ground up, massively scalable and with the flexibility to create and launch new products and services in days versus months, at unprecedented levels of cost and speed. Our relationship with Thought Machine enables us to provide a lower risk option for banks to reduce cost of operations and increase customer service and speed to market” said Mark Foster, senior vice president, IBM Global Business Services.

Along with the new alliance with Thought Machine, IBM Services will create a global practice headquartered out of London which will bring together banking transformation and implementation expertise from existing consultants along with new hires to support the demand from banks for transformation of their core infrastructure.